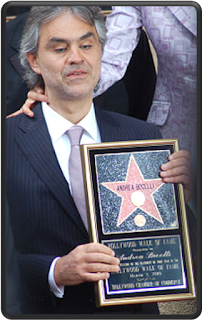 “Like stars across the sky, we were born to shine”


A quote that has a deep meaningful content and the one who can grasp its insights, can surely be successful. The quote has immense motivating power within itself and the one who has quoted it has lived upto its glory – Andrea Bocelli.


Andrea Bocelli is an Italian singer, songwriter and a record producer. He is one of the world’s most successful blind person and has achieved innumerable laurels to his name. He was born to Alessandro and Edi Bocelli on September 22,1958 in a village near Tuscany, Pisa, Italy. Doctors had advised his parents to abort the child as they predicted that the child would be born with certain disabilities. But the couple decided to give birth to the child against the doctor’s advice and Andrea was born, little they knew that this decision taken by them would gift Italy with a beautiful voice. Andre Bocelli on numerous occasions has said that the decision taken by his mother to give him birth has inspired him throughout his life.
Andrea was not born disable but had certain problems with his sight. He lost his vision completely at the age of twelve in a soccer accident. He was goal-keeping and was hit hard on his eye and suffered brain haemorrhage and was subsequently diagnosed with congenital glaucoma and lost his vision. According to his mother, music was the only thing that would comfort him. He showed great passion for music from his primitive years. He started piano lessons  at 6 and  later learned to play the flute, saxophone, trumpet, trombone, guitar, and drums. By 7, he could recognise voices of famous artists and he would also try to mimic their voices. He won his first singing competition at the age of 14. Andrea says, “I was born to sing.” He completed his secondary education in 1980 and attended University of Pisa later. For a living, he used to perform evenings in piano bars.
Andrea Bocelli has received many awards for his notable work. He has been awarded the highest ranking order of the Italian Republic and Dominion Republic, OMRI and OMDSM respectively. The singers who have worked with him say that his voice is unparalleled and as smooth as any voice can get. In 1998, Bocelli was named one of People magazine's 50 Most Beautiful People.
Celine Dion has said that "if God would have a singing voice, he must sound a lot like Andrea Bocelli" and David Foster, a record producer, often describes Bocelli's voice as the most beautiful in the world
Andrea was passionate about his singing career and he took efforts right from his tender age. If he would have sat at his place, crying for not having vision as others, today Italy wouldn’t have had such a singer. Stories of great men always inspire us, no matter they hail from which country. It’s very important for us to identify our talent and start working on it. For Andrea, it was singing. For you, it might be reading, writing, teaching, dancing, playing any sport or whatsoever. The foremost thing is identification of self. You certainly know yourself more than anyone in this world and it’s in your hands to be the best version of yourself. Be like Andrea Bocelli.
-       Shreyas J Kadam

Hi good day I enjoy reading this blog which includes lots of helpful information its very interesting, and amazing. And you can also visit us blinds singapore to help you to do more article like this one!. Thank you and God bless!

Esha - People for the Blind

Promote Your Page Too